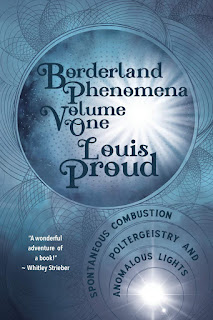 Society’s concept of the natural world has little or no room for such phenomena as spontaneous human combustion, poltergeistry and anomalous lights. Rather, these weird and baffling occurrences are either ignored altogether or unfairly and inaccurately labelled “supernatural” and hence assumed to exist “beyond scientific understanding or the laws of nature.”

In 'Borderland Phenomena: Volume One,' Proud adopts a richer, broader concept of the natural world, one that views paranormal phenomena not as foreign or magical but as occupying a position on the margins of this reality, in what he refers to as the “borderland.” In a balanced and objective investigation that spans many topics, including ball lightning, earth lights, strange rains, mysterious fires, and jinn, he manages to lay bare a refreshing and innovative approach to looking at the paranormal and so too the natural world.

“The paranormal can be glossed as the ‘super natural,’ that is, as the furthest reaches of the natural world that neither our science nor our religion can quite grasp yet, if indeed they ever can. Simplistic debunkers and naive believers abound. Able and trustworthy guides through this ‘strange, liminal realm where almost anything is possible and nothing quite adds up’ are rare and very hard to find. Louis Proud is just such a guide. His wholistic or comparative approach, whereby he reads one paranormal phenomenon off another and sees them all as deeply related, results in a vision of our world, and ourselves, that is literally fantastic and yet somehow eminently plausible. It is also, I dare add, thrilling.”

“The borderland is an uncertain in-between territory, a liminal space that is neither sleep nor waking, dream or reality, but some uncanny combination of the two, a twilight zone full of strange experiences and weird phenomena. Onto this ambiguous landscape Louis Proud casts a sharp searchlight, capturing glimpses of its inhabitants, as they quickly scurry out of view. With the patience of a naturalist, Proud examines such unusual phenomena as spontaneous human combustion, poltergeists, ‘fairy lights,’ and many others, in an attempt to widen our ideas of what exactly is natural. The result is a fascinating excursion into the not-yet-known, worthy of more than a few X-Files.”

~ Gary Lachman, author of 'Beyond the Robot: The Life and Work of Colin Wilson'

“What do we do when things occur that aren’t supposed to? We call in investigators like Louis Proud. Proud is, hands down, one of today’s brightest and most gleaming intellects in the area of anomalous phenomena. He is the rightful heir to Charles Fort and a writer who is willing to ask critically and carefully, ‘what is out there?’ I cannot think of a better guide to walk us through the ‘damned facts’ in Borderland Phenomena.”

“The borderland of reality is a strange and interesting place, imaginary or imaginal, there and not there, real in ways we don’t understand and ways that we do. Louis Proud’s Borderland Phenomena sparkles with brilliance as he explores the edge with skill, insight and care. A wonderful adventure of a book!”

Louis Proud is a writer and researcher specialising in anomalous phenomena. His articles have appeared in Fortean Times, New Dawn, FATE and Nexus magazines, and he has been interviewed on such programs as VERITAS Radio, Paranormal Realms and Whitley Strieber’s Dreamland. The author of Dark Intrusions (2009), The Secret Influence of the Moon (2013) and Strange Electromagnetic Dimensions (2015). He currently resides in Burnie, Tasmania, Australia.