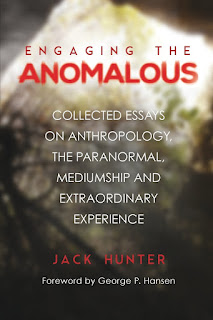 Engaging the Anomalous: Collected Essays on Anthropology, the Paranormal, Mediumship and Extraordinary Experience

Engaging the Anomalous is a collection of essays written by Jack Hunter between 2010-17. Together, the essays push toward the development of a non-reductive, participatory and experiential anthropology of the paranormal. Over the course of the book, Hunter surveys:

Hunter also poses serious questions about consciousness, experience, spirits, mediumship, psi, the nature of reality, and how best to investigate and understand them. In addition, the book features a selection of illuminating interviews with the author, as well as an original Foreword by leading parapsychologist and trickster theorist George P. Hansen. Engaging the Anomalous is a bold contribution to Anomalistic literature.

Praise for 'Engaging the Anomalous'

"As I have lectured on both sides of the pond, I have noticed a kind of quiet renaissance of interest in the paranormal among intellectuals, especially among younger scholars of religion, anthropology, and literary criticism. Jack Hunter is a shining light among these emerging voices. His search for a non-reductive anthropology, for a "paranthropology" as his journal has it, is among the most hopeful and creative signs in our shared fields. With his trademark refusal to simply "bracket" away every honest ontological question and his balanced insistence that there is a third path forward between and beyond naive belief and equally naive debunking, Jack has blazed a trail through any number of intellectual and spiritual jungles. Here is a welcome record of that trail-blazing and that intellectual courage."

"Throughout history, across all cultures, and at all educational levels, people have reported experiences labeled strange, bizarre, paranormal, or supernatural. Anthropologist Jack Hunter inspects these weird but common experiences in a collected set of crisp essays and interviews. Are such experiences real, despite their challenges to today's scientific worldview? Or should we take human experiences more seriously and use them as clues to help expand our sense of reality? These are among the endlessly fascinating questions explored in an engaging way in 'Engaging the Anomalous.'"

"A must-read for anyone interested in the study of anomalous, extraordinary, and paranormal experiences. The brilliance of Hunter's analysis is not just that he identifies how contemporary methods fall short of weighing in on the ontological reality of the paranormal... but in the construction of a new method, a new strategy, that acknowledges the "agency" of spirits and paranormal experience. Yes, spirits are ontologically real, surprise!"

Dr. Jack Hunter is an anthropologist exploring the borderlands of consciousness, religion and the paranormal, living in the hills of Mid-Wales. His doctoral research with the University of Bristol examined the experiences of spirit mediums and their influence on the development of self-concepts and models of consciousness, and is an effort towards a non-reductive anthropology of the paranormal. He is the founder and editor of Paranthropology: Journal of Anthropological Approaches to the Paranormal. He is the author of Why People Believe in Spirits, Gods and Magic (2012), editor of Strange Dimensions: A Paranthropology Anthology (2015), Damned Facts: Fortean Essays on Religion, Folklore and the Paranormal (2016), and co-editor with Dr. David Luke of Talking With the Spirits: Ethnographies from Between the Worlds (2014). He has served as a reviewer for the Journal of Exceptional Experiences and Psychology (JEEP), Journal of the British Association for the Study of Religion (JBASR), the Journal for the Study of Religious Experience (JSRE) and is a founding member of the Afterlife Research Centre (ARC). He is currently an Access to Higher Education tutor for Health and Social Care (Social Sciences) at North Shropshire College, where he teaches Psychology and Sociology. He completed a Permaculture Design Course at Chester Cathedral in 2017, and is currently working on a project to develop a mainstream permaculture curriculum for schools. He is also a musician and an ordained Dudeist Priest. To find out more about his research and publications visit http://www.jack-hunter.webstarts.com