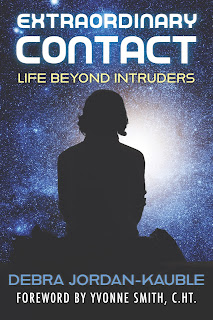 Debbie Jordan-Kauble is an “ordinary” woman with a habit of attracting the extraordinary.

After reporting a terrifying anomalous experience to Budd Hopkins—pioneering researcher of alien abduction phenomena—Debbie’s life takes a dramatic turn as she becomes the central figure in Hopkins’ best-selling book, Intruders, and in its popular TV adaptation. But while the TV series ended with a clear resolution, Debbie’s astonishing story continued in real life.

In Extraordinary Contact, Debbie shares with the reader her close-up and personal experiences with UFOs, poltergeists, the afterlife, Electronic Voice Phenomena, premonitions, synchronicities, and non-human entities. Such phenomena are woven throughout the vivid tapestry of Debbie’s life—flourishes of the anomalous, offset against an everyday backdrop of factory work, family, and friends.

Spanning four decades, Extraordinary Contact is a story of resilience and growth in the face of trauma, tragedy and loss, and an intimate, first-person account of what it means to be a lifelong experiencer of “impossible” phenomena.

Debra Jordan-Kauble was the central figure in Budd Hopkins’ classic book Intruders: The Incredible Visitations at Copley Woods, as well as its 1992 TV miniseries adaptation, Intruders, using the pseudonym “Kathie Davis” to protect her young family. In 1992, she revealed her true identity and co-authored, with her sister Kathy Mitchell, Abducted, The Story of the Intruders Continues. Debbie has since made many public appearances and has featured on numerous radio and television shows.

For four years, Debbie co-hosted her own Internet radio show, Midwest Paratalk Radio, with Gregg Cable. She has also been an investigator for MUFON and founded her own paranormal research group, the Paranormal Underground. For the last fifteen years Debbie has been employed in the automotive manufacturing industry. She has been an active member of the UAW and the Red Cross. She is a member of MENSA, a licensed cosmetologist, a wife, mother and grandmother. She lives in North-Central Indiana with her husband, two dogs and cat.