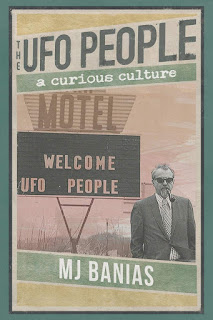 The UFO People: A Curious Culture

We are haunted by UFOs. They drift in and out of our culture in movies and on television, on billboards and in books. They are everywhere. However, for one small community, they are much more than the fodder of science fiction storytelling – they alter the entire fabric of reality.

Part narrative journey and part cultural study, ‘The UFO People’ is a challenge to the UFO subculture and the broader public to recognize that UFOs, and the people who study them, challenge societal norms, institutions, and the many ideologies we assume to be true. This book tells the stories of UFO witnesses and experiencers of the paranormal, and ties in interviews and research of some of the most famous and infamous names in the UFO subculture. With critical questions that touch on history, gender, race, culture and philosophy, this book questions the very nature of UFOs and the people who study them. It delves into the reality that the UFO phenomenon, real or not, abandons us to a ghostly realm where nothing should be taken for granted.

Take a journey into a curious culture and meet individuals who have been forever changed by the impossible. Meet the UFO people.

Praise for The UFO People

“An alluring and captivating exploration not so much of the UFO phenomenon as the people who become obsessed with it. Banias identifies that UFO phenomena are so many things that the word “UFO” is practically meaningless, while also revealing that the “believers” and scientists who study these phenomena are as interesting as the phenomena themselves. For anyone interested in social history, UFOs, or just looking for an engaging read, this is their book.”

“MJ Banias brings a different look at ufology and ufologists, covering the waterfront from his personal investigation of UFO cases to his conversations with some of the most controversial figures in the field. But beyond that, he calls on his background in philosophy to ask deep questions about the UFO phenomenon and the UFO community itself, wondering if the marginalized “ghosts” of aliens and paranormal denizens are any more or less “real” than other beliefs in modern society, deconstructing what we know, don’t know, and think we know about UFOs.”

--Chris Rutkowski
Science writer and Fortean scholar,
author of ten books on eclectic phenomena
and co-author of 'When They Appeared'

MJ Banias is an educator and writer. His popular blog, Terra Obscura, critically examines how philosophy and culture affect society’s understanding of anomalous phenomena, including UFOs. He has been interviewed on many podcasts and radio shows. His work has been featured in Fortean Times Magazine, FATE Magazine and in the book UFOs: Reframing the Debate (White Crow Books). He is a regular contributor to the website, Mysterious Universe and hosts his own YouTube channel. He lives in Canada with his wife, two children, and a massive cat.