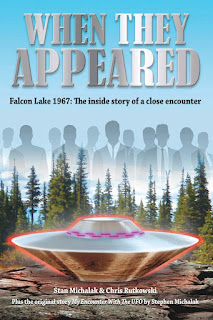 When They Appeared: Falcon Lake 1967: The Inside Story of a Close Encounter


What happened in the Whiteshell Forest near Falcon Lake on May 20, 1967? For the first time in 50 years, the many facets of this astonishing tale finally come together. Noted UFO researcher Chris Rutkowski opens his vault of documents and images, gathered over several decades of inquiry, and presents a comprehensive picture of what became the most investigated UFO case in Canadian History. Stan Michalak, son of the man at the centre of this story, offers an inside perspective of what was happening in the Michalak home immediately following his father’s extraordinary encounter. Join him as he eavesdrops on the daily struggles of his family while they deal with his father’s injuries and the endless stream of investigators and media. Released after years of planning, this once-in-a-lifetime book describes every aspect of what happened “when they appeared.”

Chris Rutkowski is a Canadian science writer and educator. Since the mid-1970s, he’s written about his investigations and research on UFOs, for which he is best known.

However, he has been involved in many other writing and media projects for more than 30 years, including TV specials (The Monster of Lake Manitoba, 1996), planetarium shows (Moonlight Serenade, 1983, and Amateur Nights, 1989) and newspaper columns (Strange Tales, in the Northern Times, Thompson, Manitoba, 1984 to 1985). He has nine published books on UFOs and related issues, a collection of short stories and has contributed to many other volumes, both fiction and non-fiction. His second book, Unnatural History, was a comprehensive and historical survey of many kinds of paranormal phenomena in Manitoba, including ghosts, UFOs, Sasquatch and lake monsters, and documented many of his own investigations. His recent works include A World of UFOs (2008), I Saw It Too! (2009) and The Big Book of UFOs (2010). He is on Twitter (@ufologyresearch) and blogs at: uforum.blogspot.com. In addition, he is a book reviewer for the Winnipeg Free Press, appears often on TV and radio, teaches courses on writing and is on the board of the Manitoba Writers’ Guild.

Stan Michalak is presently in the last of three professions he has enjoyed over his lifetime. The first, the military, took him to postings overseas including a UN peacekeeping tour while in army green, then a stint in air force blue after receiving his officer’s commission.

His second career was with local media – first radio news at CKRC, then television news and current events programming at CKND. His third, and likely last, endeavour is graphic design. He pursued art as a teen under his father’s guidance but did not return to it until 1990 when he purchased his first Mac. Trained in the traditional mediums, Stan has enjoyed combining his art skills and the digital platform working in the magazine and book industries. He has published numerous articles in national publications and has a book of fiction in the wings. His Winnipeg home sports his artwork (and some of his father’s) on the walls.