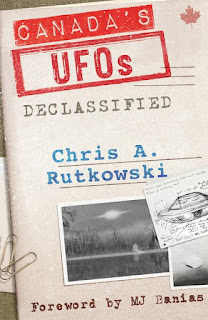 Since 1947, the reality of UFOs has been hotly debated by enthusiasts, zealots, debunkers, and scientists. Skeptics insist that people who report UFOs are either mistaken or liars, whereas many true believers are convinced that aliens are visiting Earth and interacting with its inhabitants.

Recent years have seen a tonal shift in mainstream media coverage of UFOs following surprise admissions by the US Pentagon that it continues to investigate dramatic sighting reports from its personnel.

Canada has had its own UFO projects, too. Science writer Chris Rutkowski has viewed files on these studies, many of which were declassified from higher restrictions. These records demonstrate that many Canadians not only witnessed unusual objects in the sky (and on the ground) but that they overcame their fear of ridicule and possible legal persecution by reporting their remarkable sightings to the Canadian government. What’s more, many of the UFO reports were made by military personnel, and many continue to defy conventional explanation.

Journey with Rutkowski on a guided tour of the UFO files contained within Library and Archives Canada (LAC), detailing a selection of historical reports that illustrate the kinds of objects witnessed by Canadians between 1947 and 1980, the period covered by LAC’s current digitization.

These documents offer insight into how the Canadian government went about studying UFOs, how it dealt with witnesses, and what it told the public.

Chris Rutkowski is a Canadian science writer and educator with degrees in astronomy and education. Since the mid-1970s, he’s also been studying reports of UFOs and other unusual phenomena, writing about his investigations and research in various media.

He is past president of both the Winnipeg Science Fiction Society and the Winnipeg Centre of the Royal Astronomical Society of Canada.

He is administrator of several UFO-related Facebook groups, including UFO UpDates, a forum continuing the ground breaking work of famed journalist Errol Bruce-Knapp, which began in 1996.

He blogs about UFOs and related issues at: www.uforum.blogspot.com and he publishes an annual study of UFO reports in Canada at: www.canadianuforeport.com